AND PASSED WITH AN ABOVE AVERAGE SCORE. B+

“Few cities can claim worse luck than Warsaw.  Over time the city has been burned by the Swedes, smashed by Russians and then flattened by Germans.  Not surprisingly all that’s left Warsaw looking like it’s gone ten rounds in a boxing ring.” 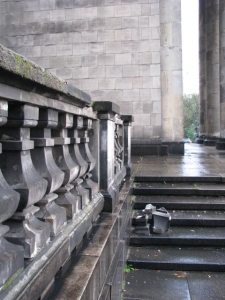 Despite the ubiquitous grey brick buildings and the cold windy streets, there is something appealing about Warsaw though, and I think it is in the spirit of its residents.   They would certainly need it given all they have been through in the last century.

I had no idea, other than a vague understanding, of just how smashed this city was by 1945.   For instance the Jewish Ghetto was so thoroughly destroyed, levelled, that very few traces of its existence may be found today.  The only remaining portion of the wall is found in the courtyard of an apartment building at ul Sienna 55.  No longer than about twenty-five feet, it is one of the few items remaining of the Ghetto.  The area around it was completely transformed after the war, a grid pattern of streets, boulevards, parks, office towers, and of course the mighty Palace of Culture were superimposed over the pre-war streets and alleys.

Does a body good…..tyskie, tyskie…

A 'gift' from Stalin

When I think of Poland, I think of tragedy.  A country which has been intermittently independent, but more often under the thumb of one empire or another, Swedes, Germans and Russians to name just a few.   Tragic because they sit smack in the middle of the east-west european invasion route and thus were ravaged in the Great War, again in the aftermath of the October Revolution (a little known war between USSR and Poland from 1919 – 1921), and soon after the dismemberment by both Nazi Germany AND The Soviet Union in 1939, the two Warsaw Uprisings (1943 and 1944) which left the city in ruins, and of course the soul-destroying years of the communist regimes.  Poland lost the largest percentage of its citizens of any combatant nation during WWII.

And yet it survives.  I somehow get the feeling that if this country could ever catch a break, they might wield considerable influence within europe – but then again the nature of tragedies is such that what can be imagined never comes to pass.

The bedwetters of climatism would rather you didn’t have children, the voracious little CO2 hounds; or better yet that we in the western world should undergo some form of ‘cull’.

Interestingly they never seem to offer themselves up first for the bolt to the head…..hypocrites.

Time for another selection of Classic Sentences from the Guardian. Or rather the Guardian’s Sunday sister paper, the Observer. Until recently, I had thought the Observer’s commentary wasn’t quite as obnoxiously self-loathing as the material that swills all but daily through the piping of the Guardian. Sadly, it seems I was mistaken:

So barks the headline of AlexRenton’s latest exercise in ecological hair-tearing. Yes, I know what you’re thinking. It’s just another overexcited sub-editor and not representative of an otherwise measured and sober article. However, the first line reads,

The worst thing that you or I can do for the planet is to have children.

One less British child would permit some 30 women in sub-Saharan Africa to have a baby and still leave the planet a cleaner place.

Why not start cutting population everywhere? Are condoms not the greenest technology of all…..

I suppose the double plus good bedwetters shall be knocking at my door soon to correct the deficiencies of my education. Until they get here, please enjoy:

Added new scenery pages.  Junior does not claim to be anything other than a hack, but with time and better equipment…..

Most photographs taken with a Canon S5IS.

Feel free to snag as you see fit.